The man who built a whole new field of chemistry

In the 90s, Professor Richard Robson created a new class of coordination polymers, and his models inspired an entirely new field of chemistry.

Unless you are a chemist you probably haven’t heard of MOFs, but they could soon have a significant impact on your life.

Metal-organic frameworks (MOFs) are a new class of solids that are being developed into gas and energy storage devices, catalytic reactors and other potentially revolutionary products.

It all started with a chemistry lecturer, some wooden models, and an itch that wouldn’t go away. 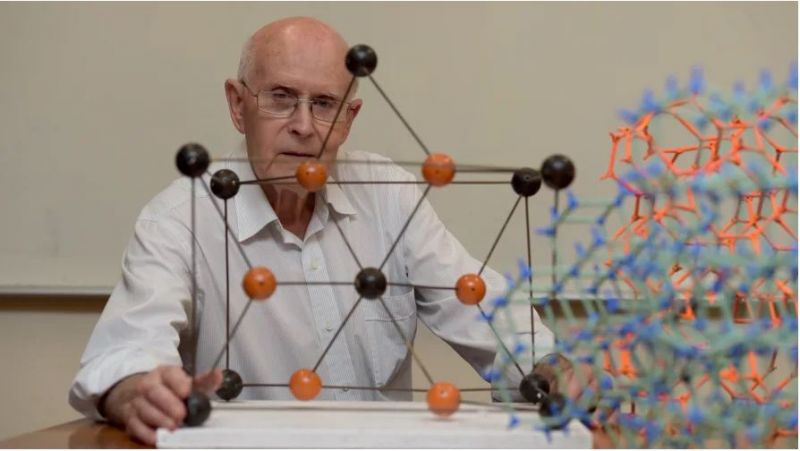 In 1974, Professor Richard Robson, then a lecturer in the Department of Inorganic Chemistry at the University of Melbourne, was invited by his departmental head, Professor Don Stranks, to build large wooden models of crystalline structures for first year chemistry lectures.

Little did he, or anybody else, know that these models – sodium chloride, caesium chloride, fluorite, zinc blende, wurtzite, rutile and others – would inspire an entirely new field of chemistry.

To build these models, Professor Robson assembled wooden balls in different colours representing atoms (like sodium and chloride for a salt crystal), and connected them with rods at the correct orientation to replicate the atomic arrangement of the crystals.

“So, what I had to do was to calculate the angles, which for me was something new entirely. The workshop would have to drill holes into wooden balls at these angles so that you could assemble the models, and I used trigonometric tables for that job,” says Professor Robson, now Professor Emeritus of Chemistry at the University of Melbourne.

When the balls came back from the workshop, Professor Robson was struck by the automatic nature of the assembly process, once it was underway.

“It became apparent that the balls were invested with information – they were pre-disposed to produce the structure that we were intending to produce,” he says.

“And that led to the thought: ‘What if you used molecules in place of balls and chemical bonds in place of rods?’” 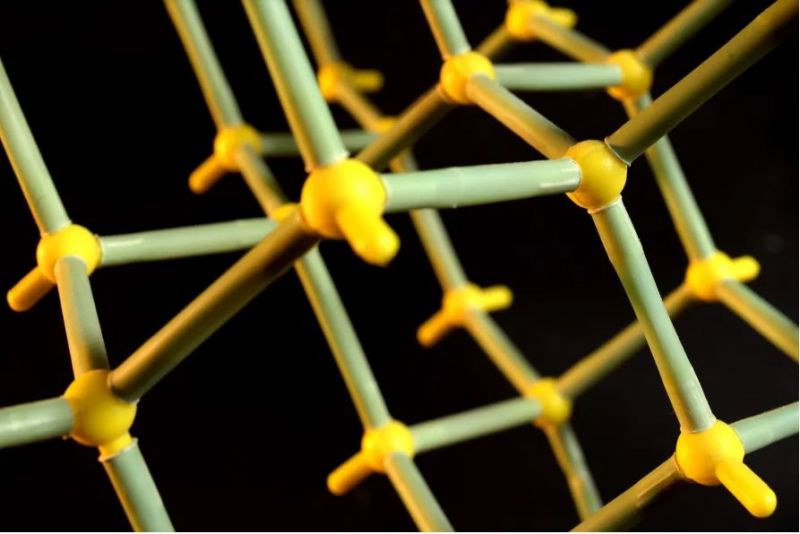 Each year Professor Robson would bring out the models for the first-year lecture, and would think to himself, “that idea might have some merit”, and then pack the models away and get on with his teaching and research.

It took ten years before he finally started work at the bench to test his idea out.

Professor Robson grew up in a village near Skipton, in Yorkshire. He did his Bachelor of Arts and then Doctor of Philosophy in organic chemistry at the University of Oxford, after which he did stints as a researcher at Caltech and Stanford before leaving the US to take up a position at the University of Melbourne in 1966, where he has been ever since.

“I was liable for national service in the US armed forces and Vietnam was just hotting up so I thought it was a good place to get out of,” he says.

Professor Robson saw parallels between the structure of his crystal models and the structures of coordination chemicals, and so he set out to see if the ‘information’ held in the metal centres and ligands – like the drilled holes in the balls – could be used to create new types of structures.

To start, Professor Robson chose the simplest crystal structure he could think of — diamond.

In diamond, each carbon atom is connected to four others in a triangular pyramid, known as a tetrahedron. All carbon-carbon-carbon angles are 109.5 degrees.

Professor Robson took copper in the oxidation state known as copper I, a metal form that has a known preference for tetrahedral geometry and mixed it in a solution with an organic compound, a specially designed tetranitrile that had four rod-like arms that spread out at angles close to tetrahedral. By evaporating the solution at the right rate, he hoped these ‘molecular rods’ would spontaneously combine with the copper to form a crystal-like scaffold.

“At that time any sensible reasonable chemist would have said our chances of creating a crystal were zero, that you’d get tangled bird’s nests — amorphous, nasty stuff that you couldn’t handle,” he says.

“It turned out that it worked marvellously well. And we did get crystals.” 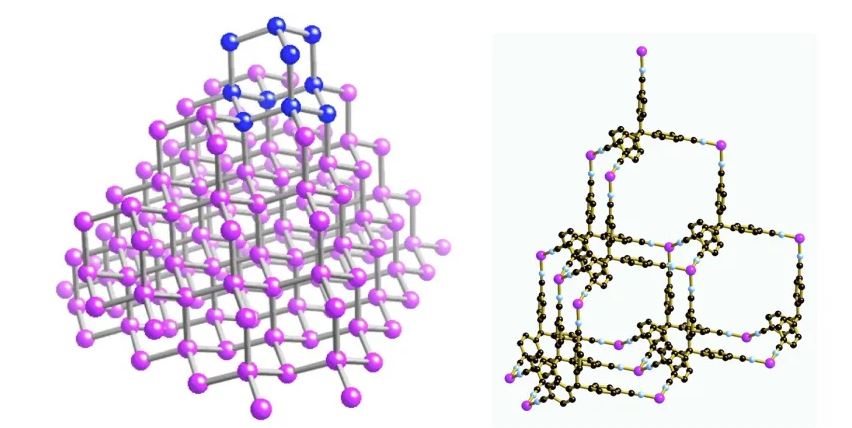 On the left is the diamond, the simplest structure to experiment with. On the right is the copper I-tetranitrile framework, with the same structure but introducing a lot of space within the framework. Picture: Supplied

The resulting substance, CuI[C(C6H4.CN)4]BF4, did have the intended diamond-like connectivity, but even Professor Robson’s closest collaborator, Dr Bernard Hoskins, had serious reservations.

Standard crystals are very densely packed, with no gaps between the atoms, but this new material was different – more than half of its contents was liquid.

By replacing direct chemical bonds with molecular rods, Professor Robson had introduced something completely new into these crystalline structures – space.

“Bernard did the crystallography (proving that the substance had the desired structure) and he was very worried about all that space,” says Professor Robson.

“Bernard was very worried that if it was published he could look very foolish. And I had to twist his arm a bit actually, to submit it for publication.”

In the early papers describing this new class of coordination polymers, Professor Robson laid out a series of predictions about these structures, all of which have turned out to be true.

Among other things, he predicted that an almost infinite range of structures could be produced, that ‘open structures’ with large channels and cavities would be developed, and that the frameworks could be ‘functionalised’ with catalytic sites, so that, for example, a substance could flow through a framework and be chemically transformed on the way through.

“I think what we started to make obvious and possible, involved a thousand times more work than we ourselves could possibly do,” says Professor Robson.

The initial discovery was well-received, appearing on the cover of Chemical and Engineering News, but did not immediately spark the huge interest that was to come; an explosion of interest that ended up diminishing Professor Robson’s part in its development.

In the meantime, Professor Robson went back to the lab and started exploring other kinds of building blocks. He took the known properties of metals and connecting molecules, or ligands, envisaged the structural form they might take, and then mixed them together, often with remarkable success.

In the early 90s, his group created a variety of building block geometries, and in the following three decades, they created an astonishing array of three-dimensional structures, including complex arrangements with multiple, interweaving frameworks.

Professor Robson and his colleagues attracted a lot of attention when they started seeing peculiar, and very beautiful, interpenetrating structures. In these structures, the frameworks are not chemically bonded together but are held together physically, like links in a chain fence.

“It’s interesting because it brings units from different systems into close proximity,” says Professor Robson, “and you may be able get interesting electronic interactions between them and throughout the network.”

Professor Robson and colleagues didn’t give their structures a formal name, which he maintains was unnecessary, as these structures were simply an application of the century-old field of coordination chemistry. But In around 1994, Professor Yaghi did give them a name – Metal-Organic Frameworks, or MOFs for short, calling this field of research ‘reticular chemistry’.

Professor Yaghi is one of the most highly cited scientists in the world, with 146,000 citation listed on Google Scholar, and his name is synonymous with the discovery of MOFs.

Chemists today searching for MOFs and related terms do not see Professor Robson’s early papers, and for many years the prolific Professor Yaghi did not acknowledge the earlier Melbourne works.

In the past few years, Professor Robson’s work has begun to receive acknowledgement.

A turning point within the MOF community occurred in December 2018, when Professor Robson was invited to give a plenary at the 6th International Conference on Metal-Organic Frameworks – his first attendance at a MOF conference.

In his humble fashion, Professor Robson says he thinks it went “quite well”.

“They clapped,” he says.

Thousands of MOFs have been produced and there has been progress in developing some of the applications Professor Robson predicted in the early 90s, yet large-scale commercial applications have yet to materialise.

There has been talk, led by Professor Yaghi, of using MOFs to collect water from the atmosphere (even in the desert), to capture CO2 from powerplants, and to use MOFs to store natural gas or hydrogen to power cars. Associate Professor Brendan Abrahams, a long-time collaborator of Professor Robson, says there was a lot of interest in on-board storage of hydrogen in cars, because MOFs could remove the need for heavy, high pressure hydrogen storage tanks.

“There was considerable interest from car manufacturers, but that has died down, I think, because the MOF material did not bind the hydrogen strongly enough,” he says.

Professor Robson harbours the notion that the next generation of high-temperature superconductors will be coordination polymers.

“We need metal ions that can give and receive electrons, and connecting ligands that do the same. On that simple basis we still haven’t been able to get things that conduct electricity well, but it’s just a matter of being able to make these compounds,” he says.

“His accomplishments are outstanding but he is not someone who publicises his achievements. When I first started to work with Richard I was absolutely amazed at his insights and ideas,” he says.

“The ideas that underpin the design and synthesis of coordination polymers are relatively simple but when the research first started, nobody else was working in the area. The early years were very, exciting – almost every week there was a new fascinating crystal structure to discuss.”

“I think it would be fair to say that the element of design has characterised much of Richard’s research,” he says. “So whether it’s small molecules or large extended structures, design has been a very important part of what he has attempted to do.”

“The 3D models Richard made are still used in our teaching today. While we do have computer graphics and multi-media resources at our disposal, from a teaching and learning perspective the 3D ball and stick models remain particularly useful because it is possible to physically touch and put your hand inside the structural model. This is important to students and it was important to Richard in regards to the formulation of his ideas for making new classes of materials.”

Professor Robson is happy spending his time in the lab, designing and creating new and interesting structures.

“My contribution in all of this has been more like that of an artist or an architect,” he says.

“Highly non-scientific, in fact, and any scientific respectability that’s come out of it has been due to people like Brendan Abrahams, Bernard Hoskins, and Tim Hudson, who did the crystallography.”

A version of this story was published in Pursuit.